The Community Library is  located in the Community Hall and managed by volunteers, is open several days a week for limited hours.
The Davis Bay Community Library’s collection contains adult fiction and non-fiction with some large print books. It serves primarily the neighbourhoods of Davis Bay, Wilson Creek and Selma Park, but anyone can borrow books.

Starting March 1, 2018 the library will be open on Fridays from 2 pm to 4 pm, including holiday weekends.
Location: Inside the Community Hall at 5123 Davis Bay Road
Loan Period: 3 weeks
Overdue fee: by donation
Volunteers: volunteers operate the Library under the umbrella of the Community Association. No prior library experience is needed to become a volunteer librarian - training is provided.
Donations: the Library welcomes donated books in good condition. Volunteers accept donations during library hours or by special arrangement. Please do not donate encyclopedias, Reader's Digest condensed books, or magazines.
​
For further information contact us at:
email: library@davisbaybc.com
​ 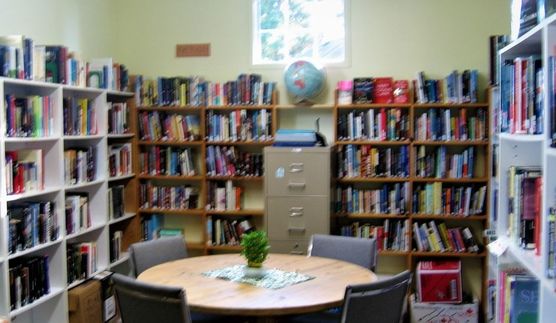 History of the Library

​Early days
The library in Davis Bay probably began, like most small community libraries, with neighbours simply sharing books.  Then someone set aside a spare room or part of the basement in their home where people could bring their books and pick out others.  As the community grew and more people used the library, they began to keep track of the books in a formal way.
Throughout the 1970s and 1980s, the Community Association’s goal was to ‘provide something for everyone.’  A library for the whole neighbourhood would have been an important part of realizing that goal, and in 1972 the Association opened the Wilson Creek Library. (We don’t know why it wasn’t named after Davis Bay, although the Association itself was the ‘Wilson Creek Community Centre Association’ at that time.)  The library has been housed in the Community Hall since 1975.
Years of growth
Volunteers and personal donations have always been vital to community libraries, but public funding has played a significant role, too.  It was a Canada Council grant for books that, in addition to funds from a community garage sale and donated books, enabled the Association to open the library.
In 1975, the Sunshine Coast Regional District approved its first annual grant ($600) to the Wilson Creek Library which was then one of six community libraries on the peninsula.  The provincial government initiated its Reading Room program in 1978, and the little library in Davis Bay was the first BC library to be funded under it.  This meant an annual provincial grant of $1200-1400 in addition to the SCRD annual grant.
The library’s peak years were the early 1980s; in 1982, it had 106 borrowers, 2,900 books and an annual circulation of 1,500. In 1985, a grant from the provincial government enabled the Community Association to build an addition to the Hall for the library, along with other renovations.
When the neighbourhoods of Davis Bay, Wilson Creek and Selma Park became part of the District of Sechelt in 1986, the Wilson Creek Reading Room became the Davis Bay Branch of Sechelt Public Library.  It lost its direct provincial and regional funding at that time, but gained municipal funding through the main library and representation on the Sechelt Public Library board.
More recent times
The library in Davis Bay experienced a gradual drop in both users and circulation of books over the next two decades. This was due in part to changes in neighbourhood demographics and residents relying more on the centralized services in Sechelt.  There was definitely increased use of the main library in Sechelt after 1996 when it moved into its present building.
On March 1, 2007, the library became the Davis Bay Community Library, once again under the sponsorship of the Community Association.  Circulation is on the increase with a dedicated group of volunteer librarians and lots of new and current books.